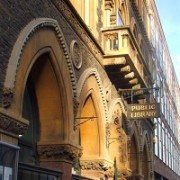 Spending on cultural services such as libraries, sports and parks has plummeted by more than a quarter since 2010.

An exclusive analysis of local council spending figures has revealed the scale of the huge cuts that have hit the country’s cultural institutions.

Spending on open spaces has fallen by 22 per cent while library expenditure is down by 24 per cent overall and tourism spending has plummeted by 48 per cent. 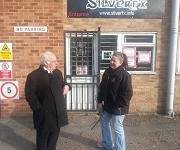 City Cllr for Bobblestock and Mayor, Charles Nicholls (IOC) and neighbouring ward member, Cllr Mark Mansell (IOC) went down to the entrance to the Three Elms Trading Estate to see what could be done regards the issue of unauthorised parking on the estate and along the verge of the access road to the estate.
Businesses on Three Elms and other parents have complained to the Council and school about their frustrations over the school run parking. The Range superstore (on site of old Homebase store) allows parents of Trinty School to park in their own carpark (30 metres away from the entrance over the brook to Trinity) but some parents seem unaware of this permission. Some parents also seem unwilling to walk the extra 10 metres.
Cllr Mark Mansell, who has a son at the school, says he “understands the frustrations and concerns of both parents and the businesses on Three Elms”. Cllr Nicholls hopes the possibility of “clearer signing and better communication between the school and the parents” will encourage all parents to use The Range carpark to drop off and collect children.
https://www.itsourcounty.org/wp-content/uploads/2016/03/mayor-parking-150.jpg 150 200 PaulNeades http://www.itsourcounty.org/wp-content/uploads/2019/02/IOC-crop-Colour-1.jpg PaulNeades2016-03-15 09:48:062016-03-23 09:06:30School Parking Issues in Three Elms

ECONOMIC DEVELOPMENT..? NOT FOR THE TORIES IF THAT MEANS ARTS AND CULTURE!

Cabinet member Cllr Harry Bramer, whose portfolio includes Cultural Services, is ‘in denial’ about the value of arts and culture to their local economy.

Cllr Bramer’s statement came at the cabinet meeting on 10 March where the cabinet considered an external report on the future of the Hereford’s Museum & Art Gallery, Old House and the Friars Street resource and learning centre. The full report is at:

It provides yet further evidence for the massive ‘added-value’ to the local economy of local authority investment in the entire cultural sector – from Glasgow to Margate, Gateshead to rural Dorset. And in Herefordshire the report states: “for every £1 spent on the Herefordshire Museums Service £8.41 is released into the local economy. Herefordshire’s 33 heritage attractions bring at least £18.8m of tourism value to local businesses.”

Cllr Anthony Powers, group leader of It’s Our County, asked Cllr Bramer to agree that such spectacular evidence should be applied to all Herefordshire’s cultural services, and not just to museums or statutory duties such as Archives and Records, in support of the county-wide UK City of Culture 2021 bid. His answer was a flat “No, I do not agree.”

All Conservative councillors voted against IOC’s recent budget amendment even to re-instate the Council’s meagre £60k support to the county’s arts organisations.

The Marches Local Enterprise Partnership was formed through a government initiative in 2010 as one of 39 such LEPs across England to act as a channel for national and European funding for major infrastructure projects in Herefordshire, Shropshire and Telford & Wrekin.

Nearly six years later, campaigners say the body should explain what it is spending – and how they are accountable.

It’s Our County’s leader Cllr Anthony Powers said: “Should an ‘informal partnership’ that is not even a legal entity be responsible for giving out tens of millions of pounds of public money in grants to local projects, should this partnership be dominated by unelected private-sector businessmen and be largely unaccountable to local tax payers for its operations?”

The calls came at a meeting of Herefordshire Council’s General Overview and Scrutiny Committee on 8 March.

“The answers from LEP Board chairman Graham Wynne and director Gill Hamer were not encouraging,” said Cllr Powers. “Despite being active for five years the Marches LEP is only now producing its first Annual Report, due in April; and LEP director Gill Hamer’s claim that its financial statements can be found on Shropshire Council’s website has been contradicted by the council who state: ‘The Council has concluded that the role of accountable body is to be deemed as an agent, and therefore the net grant held should not be accounted within the Council’s accounts’.  So where can these accounts be seen?”

Councillors and members of the public have had to pressure the LEP for years to be more open and transparent, and many local businesses are unaware of the opportunities the LEP offers. Successive Monitoring Officers at Herefordshire Council are known to have been uncomfortable from the start with LEP governance and accountability arrangements: yet nothing significant has changed in five years.

“It’s high time our LEP behaved more responsibly. The leopard may not be able to change its spots but the LEP must do so – and sharpish – so the public can know what’s going on”, said Cllr Powers.